The imprint on the back makes me confident that my expectations will not be disappointed: "Designed & Engineered in Germany by United Minorities". The company from Breisach was founded by Attila Czirják, who has been designing and manufacturing high-quality hi-fi and pro audio products since 1994. An absolute expert and not only in this area. The native Hungarian is also a qualified mineralogist, has completed a marketing degree and studied sculpture for a few more semesters. In addition to reProducer Audio Labs, he also made his services available to ESI and helped to optimize the uniK 08+. The loudspeakers are manufactured in China. 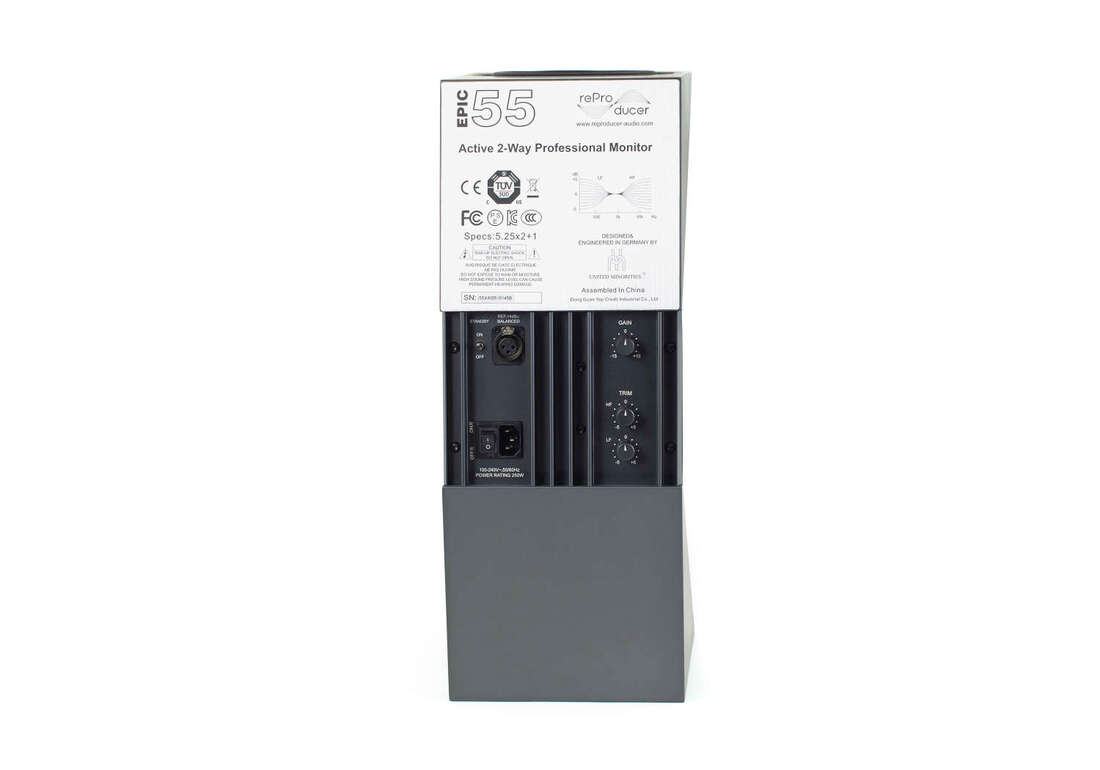 ​The Epic 55 features two 5.25" woofers each, which are supported by two 6.25" passive radiators - one on the top and one on the bottom of each speaker - to maximize bass reproduction. Like the 1-inch tweeter (a metal dome with rear chamber), the mid-bass drivers are developments by United Minorities on behalf of reProducer. An extremely low-noise Class D amplifier supplies the woofers with 120 watts RMS power and the tweeter with 75 watts. The housing is made of HDF and anodized aluminum. Signals are processed purely analog by the Epic 55, without any DSPs, dynamic manipulations and psychoacoustic tricks. The manufacturing quality is exemplary.

The name Epic 55 was chosen appropriately and understandably, the midfield monitors are basically two Epic 5s combined at the top, except that the second tweeter is omitted. This results in a D'Appolito arrangement with the Epic 55. This principle, which goes back to an American physicist, places the tweeter at the same distance between two mid-bass drivers. Ideally, the distance between the membrane centers of the two mid-bass drivers and the tweeter is less than or at most equal to two thirds of the wavelength of the set crossover frequency, i.e. 18 dB/octave if a 3rd order filter is used. Both specifications are not fully met, because the filter is one of the 4th order and the distance between the membrane centers does not correspond to the ideal. In this specific case, the separation frequency is 2500 Hz, and the wavelength is accordingly approx. 14 centimetres. A maximum of two thirds of this would be approx. 9.3 centimetres, but the membrane centers of the two woofers are each at a distance of approx. 12 centimeters from the center of the tweeter, i.e. only slightly less than the entire wavelength of the crossover frequency. You can philosophize about "real and fake D'Appolitos", but you don't have to. More importantly, this arrangement principle should ultimately minimize ceiling and floor reflections and improve the overall imaging of the space.

The mathematically incorrect equation "2 x 5 = 55" still works when you look at what an Epic 55 costs and how it is delivered. A pair of Epic 5s reach their new owners in a nice, custom-fit foam-lined flight case, for which they pay 1649 euros (RRP, "street price" lower). Exactly the RRP for an Epic 55, which of course claims a case for itself due to its size. The speakers are also wrapped in a fabric bag in the case. The foam cover has cut-outs for the supplied power cable and the four aluminum spikes for vertical installation, so that the lower passive radiator is at a distance from the ground and can vibrate freely. There is also a cover in the case of an Epic 55 to protect the upper radiator. The Epic 55 are suitable for both vertical and horizontal use, vertical use is recommended. The logo can be rotated to the correct position. This is of course irrelevant for the sound, but I really like such smart attention.
Sound of the Epic 55

The provided Epic 55 needed a quite long import phase. My first impression was not euphoric. A bit sharp in the highs, I thought, and missed the bass at the same time. After a day of playing in, the impression of peak heights had already evaporated. Bass unfolded more slowly and seemed to me to be where it should be after just over 72 hours. From this point on, there are basically only positive impressions to report. In summary it can be said that reProducer Audio Labs keep what they promise with the Epic 55: straight frequency response, fast transient response, high dynamic range, most precise time alignment and excellent directivity. 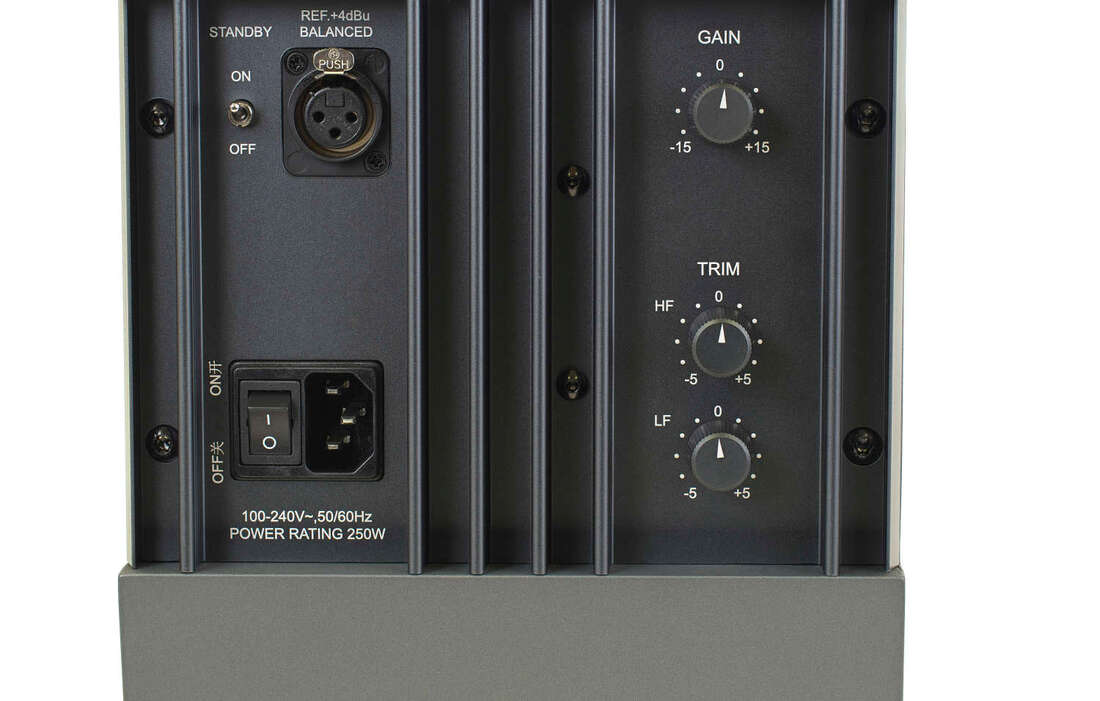 The mid-range is tidy and neutral, which is very important, as this is where the fundamental tones of almost all instruments and voices cavort. Motörhead were certainly not known for audiophile productions, but I still think their music is suitable for testing because of Lemmy's characteristic bass sound. He played his Rickenbacher with Marshall guitar amps that were turned up to volume and went up to volume 12, which resulted in a sound that was less heavy and deep and more tugging in the middle. The better the speaker, the more likely you'll hear Phil Campbell's guitar AND Lemmy's bass instead of a distorted mush. With the Epic you can hear very well that they are two instruments.

I didn't notice any discoloration in the bass or treble range either, and I found the resolution across the entire audible spectrum to be very good. The impulse behavior of the Epic 55 is really strong, to put it bluntly: these things are extremely fast. It doesn't matter whether it's double bass drum attacks, fast snare rolls (fast drums in general), rapid brass interjections or double-time raps, the speakers reproduce everything effortlessly and always sound accurate. Hear very well on Mastodon's "The Crux", Jackson's "They Don't Care About Us", Peter Fox's "Alles Neu", "Uptown Funk" by Mark Ronson feat. Bruno Mars or in the double-time part of Curse's "Rap". 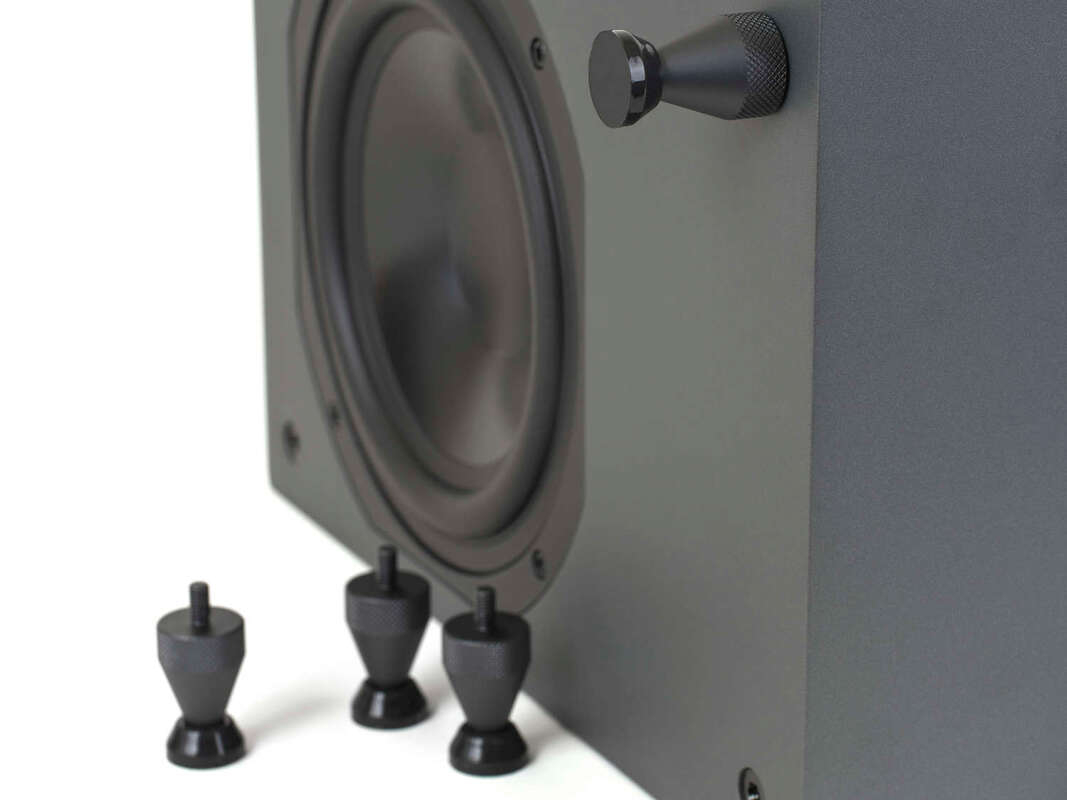 The joy of playing the Epic 55 is also evident in dynamically demanding pieces such as Norah Jones' extremely lively vocal performance in "I don't know why", where the clear sibilants are also reproduced by the Epics without any sharpness, or classic pieces such as Tchaikovsky's fantasy overture Romeo & Juliet.

In the bass range, the Epic 55 initially seemed a bit reserved to me, with "Oh Yeah" by Yello or Daft Punk's "Give life back to music" I missed some power and pressure. But the longer I worked on my own mixes, the impression grew that the clean, dry, not quite as powerful reproduction of this frequency range by the Epic 55 is the more honest and that other speakers and headphones tend to "thick" slightly. In any case, you have to “listen” to each loudspeaker and learn to appreciate its peculiarities.

The depiction of the spatiality through the Epic 55 is phenomenal. Live recordings are particularly enjoyable to listen to (e.g. Falco's Donauinsel concert). Starting from a stable phantom center, the stereo panorama opens up, sound sources can be localized excellently, the sound is excellently released from the speakers and an impressively realistic space opens up, even in the depths. If you hadn't heard the word depth of field, it probably springs to mind when you hear about the Epic 55. When checking older productions of my own, the spatial quality of the monitors revealed that I often produced mixes that seemed quite disjointed. With younger mixtures, the results appear much more consistent.
Conclusion

The Epic 55 midfield monitors from reProducer Audio Labs are simply very good speakers. Not only is the design unusual and eye-catching, the sound is also remarkably good. The impulse and dynamic behavior as well as the representation of the spatiality, especially in the depths, are the strengths of the perfectly processed loudspeakers. With the Epic 55 you get a reliable, accurate tool at an attractive price. Recommended!