Sound & Recording Magazine - Japan
April 2019
First, we measured the product with pink noise and sine wave signals. As written in the catalog, we have identified that within +/- 3 dB, mostly flat frequency response, and within +/- 45 degrees phase characteristics from 56 Hz to 20 kHz (40 kHz on spec). That's great.

In order to divide the band across multiple drivers, the filter must split the signal, which is often less accurate on the time axis. This can lead to a problem where the Phase is reversed. On a 2-way speaker, the input signal is divided into low and high ranges. Even if the timing is slightly off (phase difference), the brain recognizes that it is a signal, but the phase difference has a significant effect on sound quality.

Let's hear Epic 5. The manual says it is designed for nearfield use and guides you to use it at a distance of between 0.8 and 1.4m. It felt like that when I actually listened to it. The balance was very good, with the left and right speakers spaced and the ear distanced to be 1.3 meters per side.

The Epic 5 is designed to physically fit the phase between the driver units, so it is important to adjust the acoustic axis to the height of the ears and then lay it in the rear position. At first, it may sound strong and sound hard, but in that case, it would be nice to widen the distance from the speakers a little. 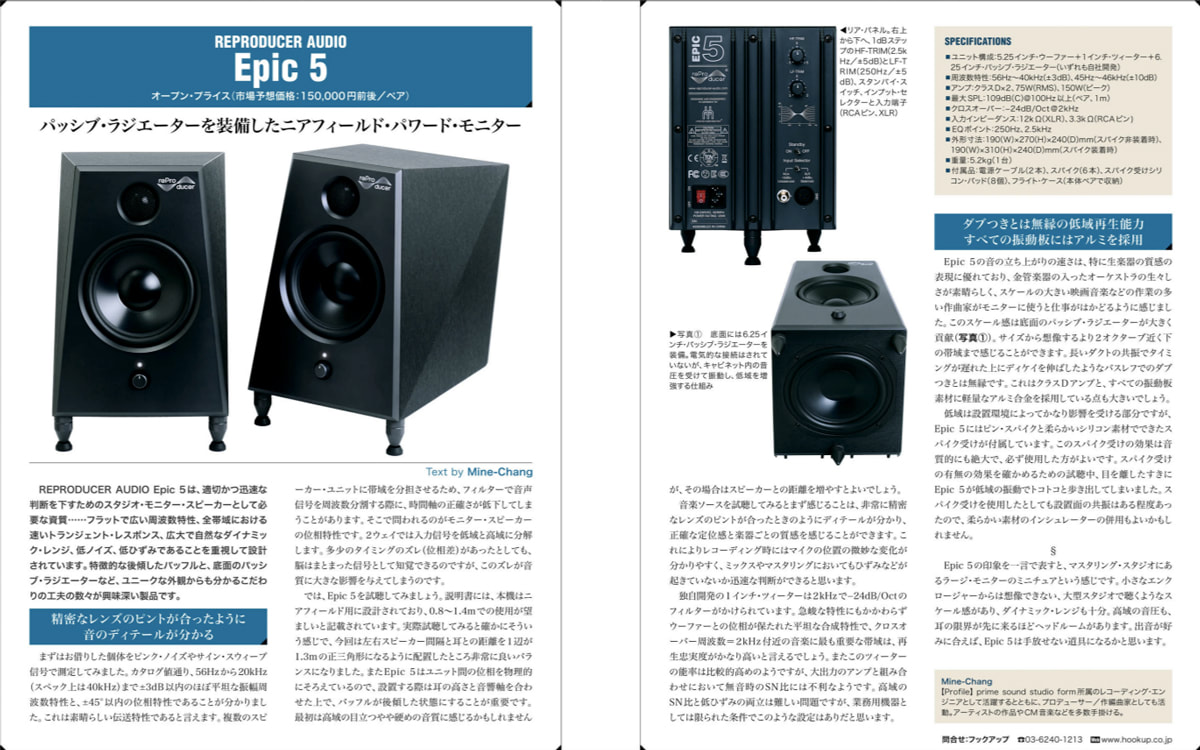 I've played music this time, and the first thing I've noticed is that the details were shown, just like when the lens was very precise, so I could feel the exact location and the texture of each instrument.

These features make it easy to see the subtle changes in the microphone position during recording and can be monitored with no distortion during mixing and mastering, which will enable quick judgment.

The self-developed 1-inch tweeter has a 24 dB/Oct filter at 2 kHz. The filter is steep, but regardless, it shows a flat, well aligned. And the most important band in music, the crossover frequency (2 kHz), was clearly heard. This tweeter shows relatively good performance, but since the amplifier has a large output, the SN ratio is a little disadvantageous when there is no sound. Having both a high-end SN ratio and a low-bandwidth depot is a difficult issue, but under limited conditions, it is acceptable to set to this level.

Low-bandwidth regeneration without unnecessities; aluminium is used on all vibration plates

If you listen to Epic 5's transient response, the 'Architecture Sound' with the original instrument are very vivid, I felt that the work would be smooth if the composer with the large scale, such as movies were used. This scale also contributes greatly to the underlying passive radiator. You can look at the size and feel it about two octaves below what you might have imagined. There is no base reflective build-up of long ducts and late timing, which makes the decay sound more likely to increase. The use of the Class D amplifier and light aluminium alloys for all vibration plate materials has played a significant role.

While low-bandwidth is heavily influenced by the installation environment, Epic 5 comes with pin spikes and flexible silicone pad. This spike holder (pad) has a very positive effect, so it is recommended that you use it. When we removed the pad to check the effect of the spike support, the low-bandwidth vibration caused Epic 5 to move slightly. Even if you use a spike support, there is some resonance on the mounting surface, so it would be good to use a soft-material insulator.

In a word, it's a miniature version of a large monitor in the mastering studio. It has the scale to listen to in a large studio, which is unimaginable in a small size, and enough dynamic range. The headroom is so wide that the high-altitude sound pressure and ears feel limited first. If the sound is just for your taste, it may be a tool you can't take off every day.