Daichi: It's a bit unique, but the speakers are a little bit up. If you look at the manual, it is best to install the speaker at ear level instead of changing this angle. That way, you can match the time that high and low-band sounds reach your ears.

Sound Designer: Was it easy to install?

Daichi: We need to spike the bottom, but we don't need an insulator instead. The manual assumes that you use it in Nearfield, so it's better not to widen the distance between the left and the right. Also, the speaker is facing upwards a little, but it should not be fixed at right angles. Obviously, the sound changes with the angle of the speaker, so you need to listen to it from the specified position to be able to hear the low tone. Because the sweet spot isn't that wide, I feel like I'm my only monitor speaker.

Sound Designer: It's a thoroughly calculated product. Do you have any other features?

Daichi: Passive radiator is on the underside. A monitor with a passive radiator can create quite low end compared to its size. So you can play computer-generated music and strong kick-based music. A monitor that is this compact usually doesn't have enough low-pitched

Sound Designer: What is a passive radiator?

Daichi: Most monitor speakers have holes called base reflections, which also allow you to emit low-pitched sounds, or to export vibrations. However, because the base reflectors are usually located on the back of the monitor speakers, the sound will reflect if you don't take the distance between the wall and the speaker to some extent. On the other hand, the passive radiator does not send low-pitched sound out; it absorbs it. So it's the latest technology that doesn't cause problems even if you're close to the wall.

Sound Designer: Is there a merit when you work with it?

Daichi: I tried Epic 5 for the mix on a band, and it was easier to make the rhythm. Masking of bass and drums and frequency masking were easy to hear. Usually, it's hard to determine how many kicks and how many bases are available in a speaker this small, so I add a sub-woofer. On the other hand, too much low bandwidth causes a boom and shatters the attack. Epic 5 gave an ideal sound that was tight overall, but with a good low-bandwidth view.

Sound Designer: It also has a calibration EQ.

Daichi: Because there's enough low-ends, we have decreased low EQ by two steps. This setting will depend on your installation. It's very well balanced because of very high frequency and also low end. 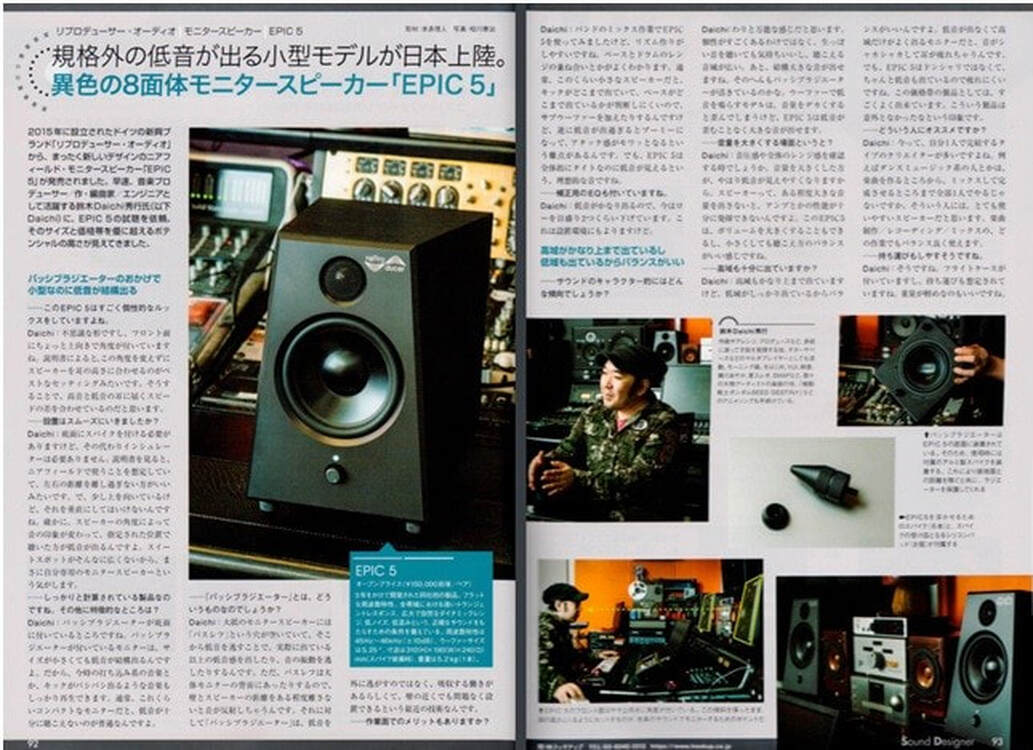 Sound Designer: How about sound propensity?

Daichi: I feel more omnipotent than I expected. the speaker does not have so much strong inclination, it feels good to hear raw sounds, and it has a wide range of sound bands. And thanks to the passive radiator, even a fairly large volume. And the model with the woofer low-pitched sound, while the volume was distorted by increasing it, Epic 5 was able to increase the volume without distortion.

Sound Designer: In a situation where you're increasing the volume, what's the case?

Daichi: Increase the volume when checking the sound pressure and overall sense of bandwidth. It's because you need to increase the volume so you can see the lower notes better. Speakers don't have enough performance, such as an amplifier, if they don't produce a certain amount of sound. This Epic 5 can also increase the volume significantly, but it has a good balance of sound even in small volumes.

Sound Designer: Is there enough high-end?

Daichi: High bandwidth comes up pretty high, but low bandwidth is definitely there, so it's a good balance. and the mids were still there. In the case of monitors with poor low-pitched, high-pitched sounds make your ears feel tired quickly. Epic 5 doesn't seem to get tired of hearing because it is also low-pitched. I think it's very good for this price range. I was surprised to find that you haven't had one like this before.

Sound Designer: To who would you recommend?

Daichi: These days, there's a lot of creators who do it all by themselves. For example, a dance music player does it all by himself, starting with composing, mixing and finishing. I think it's a really good speaker for someone like that. From compositing, recording, and mixing, you can balance anything.

Daichi: That's right. Hard cases are provided, and I think I was thinking about moving in the first place. The weight is surprisingly light.
Hideyuki (Daichi) Suzuki is a multi-player, guitar player, bass player, and has various talents such as songwriting, production, etc. Starting with Morning Musume, he collaborated with big artists such as YUI, Segawa Ayaka, Iri Leo and SMAP, and also participated in animation songs such as 'Gundam Seed Destiny'.